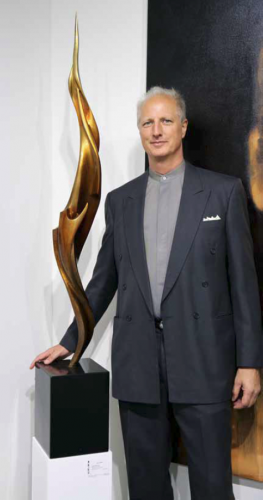 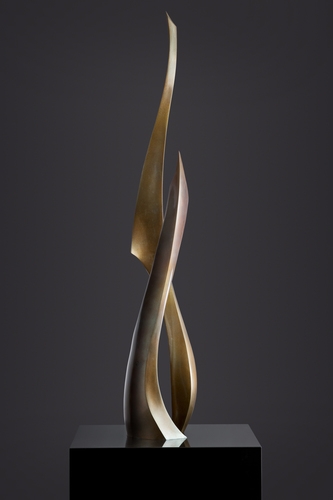 “We all aspire to greatness in our lives and we all struggle with difficulties in bringing our best into being. The purpose of my art is to remind us of our moments of high resolve – to support us, lifting us from the myriad of life’s distractions, giving our soul a place for renewal, a place that reverberates with the power of our innermost conviction. This is the passion behind my every creation.

Each piece is meant to serve as an exploration and celebration of the courage it takes to be our authentic self, to take our place in life, to surrender each day to our soul’s true calling, to trust, to live wide open – tender and intimate with the world perceived through feeling. For me, being surrounded by these visual statements of intention is an immersion in the magic of being alive, a way of marinating in what it means to love deeply and to be part of making this world a beautiful place to live.

Art has been a driving force behind humanity’s every significant transformation. If my art may carry on that tradition, therein lives my joy, my passion, and my purpose.”

I have embraced life’s journey with passion and purpose. I have leaped out of helicopters to ski precariously steep mountain faces. I have windsurfed and surfed down waves the size of five-story buildings. I explored different paths and took different risks and threw myself into the business world with the same zeal and drive. Even there, the world I perceived around me didn’t seem to have many people who were truly living. It seemed that most people, including myself, were living isolated lives, caught up in some kind of busy-ness, but rarely truly happy. This seemed to be such a contrast to the musicians channeling pure passion through their instruments, singers belting out sounds from voices that reverberated in my soul, and athletes who were pouring their heart and soul into their form of excellence. I wanted that…

Against the advice of friends that recommended a safer, more secure, life path, I began a career in fine art because there was nothing I wanted to do more with my life than paint and sculpt. As an artist, I want to push the envelope of what art can do — use it to heighten our sense of aliveness, create transformational experiences, taking us from where we are to where we want to be, emotionally and spiritually. Pushing the envelope of art in this way requires total commitment, complete surrender, radical honesty, raw authenticity and utter vulnerability. I must reveal my feelings in complete nakedness. I must fully expose my soul.

As I embrace the wholeness and beauty of the life I have come to live, I have seen beyond the veil revealing a connectedness that I sense we are all part of. Beyond personal creation, this has taken me through the most challenging stages of relationship to a magnificent place of true love partnership with my beloved wife—my most immediate and powerful inspiration.

The lines in my sculptures and paintings reflect the flow of life force energy I feel in my body when I am feeling fully alive and connected. They reflect the curves we find where a river caresses its banks, the sensuous lines of one’s fingers tracing the magnificence of a lover’s body, the ocean rising to create majestic waves, the way a skier accelerates through a turn or God spins our Universe. These lines are primordial and intrinsic to our nature. We sprang from such energies and they are part of who we are and part of everything powerful and beautiful around us.

I have developed a deep appreciation for how my art can transform living and working environments into vibrant, meaningful spaces; spaces full of the power to ignite passion and help us lead lives centered around the vision we hold for our common future. As an artist, I must do nothing less.

Art is passion. Passion is life. Life is art.